Make no mistake: The Miami Rum Renaissance Festival is the perfect place for newbies to get their feet wet and sample a wide array of styles, learning the basics about an incredibly versatile spirit that’s equally at home in cocktails and sipped neat.

But the real treasure of the sixth annual event – which kicks off Monday with a test run of Miami Rum Festival Cocktail Week and culminates with three days of “grand tastings” attended by up to 15,000 – is the wealth of opportunities to meet and learn from the world’s foremost rum experts. For enthusiasts, it’s a unique opportunity to vastly broaden one’s knowledge of cane spirits and the rum lifestyle.

Those same newbies may scoff at the notion of a “lifestyle” based on booze. But ignoring the clichéd images of pillaging pirates, the burgeoning rum world offers a surprising sophistication and myriad ways to enjoy the spirit on many levels. At Miami Rum Renaissance Festival, the Grand Tasting booths on the convention center floor are the main draw, but you’re missing out if you don’t check out some of the events during the week, plus the many educational seminars held during the Grand Tastings. Here’s a rundown:

This year’s festival offers a beta version of this new event, which replaces the nightly VIP parties that were typically held at hotels around the area. From Monday, April 21, through Sunday, April 27, the festival will showcase some of the area’s best bars, bartenders, cocktails and spirits. It’s a welcome change of pace, and more in tune with today’s blossoming cocktail culture. Until recently, Miami seemed to be lagging behind other major cites, but thanks to some talented mixologists it’s catching up fast. On tap for the week:

* Monday, April 21: Pop-up bar with cocktails from Caña Rum Bar in Los Angeles. At The Broken Shaker in Miami Beach, 9 to 11 p.m. 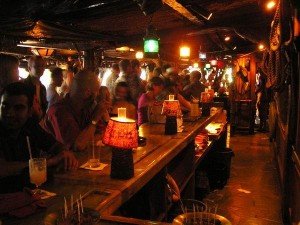 * Tuesday, April 22: Tiki cocktails in The Molokai bar at The Mai Kai in Fort Lauderdale, with optional Polynesian dinner show. Happy hour runs from 5 to 7 p.m. and the show starts at 8. Rum Fest attendees get half off the show charge and a complimentary Don Q Anejo specialty cocktail. There will also be bus transportation (seating is limited) between the Doubletree by Hilton hotel and The Mai-Kai for only $15. E-mail RSVP@MiamiRumFest.com for more info. And be sure to check out The Atomic Grog’s Mai-Kai Cocktail Guide for reviews of all the legendary tropical drinks.

* Wednesday, April 23: Bacardi VIP party in the penthouse at the esteemed rum brand’s headquarters in Coral Gables, 8 to 10 p.m.

The Broken Shaker (From TheFreehand.com)

Get more information at MiamiCocktailWeek.com. Several of these events are on The Atomic Grog’s must-do list. The traditional party at The Mai-Kai is a no-brainer, and any opportunity to enjoy special events at The Broken Shaker, a James Beard Award-nominated bar, is a treat. If you’re feeling more upscale, check out the Miami Beach bar tour and the requisite Bacardi party.

With the exception of the Bacardi penthouse, these venues are open to the general public. But to gain VIP access to the special Miami Rum Fest benefits such as special cocktails and pricing, you should RSVP in advance by e-mail to RSVP@MiamiRumFest.com. VIP admission is complimentary for all festival ticket holders. [See pricing info below]

SEMINARS AND THE GRAND TASTING EXHIBITIONS

Guests sample rums at a Grand Tasting booth. (From MiamiRumFest.com)

On Friday through Sunday, the largest group of rum producers, professionals and enthusiasts in the world converges on the Doubletree by Hilton Miami Airport Convention Center for three days of sampling hundreds of rums from around the world. The 50,000 square feet of exhibition space is filled with booths for rum companies to tout their latest and greatest products. Friday is Trade Day, reserved for spirits industry professionals, press and VIPs from 3 p.m. to 7 p.m. The public Grand Tastings are 4 to 7 p.m. on Saturday and Sunday, but VIP passes get you early entry at noon.

You could spend all your time sampling all the great rums and cocktails, but you’re doing yourself a disservice if you don’t venture upstairs to the meeting rooms to check out some of the educational seminars, which also include complimentary samples of rums and cocktails. Here’s a preview:

* 3 p.m. – The Art of Rum Tasting: Improving Your Sensory Experience, by David Cid. Improve your ability to detect the aromas and flavors commonly found in rum with expert techniques. Includes four rum samples from Bacardi.

The Papa’s Pilar seminar at last year’s event. (From MiamiRumFest.com)

* 5 p.m. – The Discovery of El Dorado: Demerara’s Liquid Gold, by Shaun Caleb. Explore the history of rum’s association with Guyana, and the El Dorado brand’s traditions of distillation.

* 6 p.m. – Falernum: The Flavor of Barbados, by Tyler Kok.
Delve into the history and legend surrounding one of the most misunderstood tropical cocktail ingredients.

* 3 p.m. – How to Taste Rum Like a Judge, by Bernhard Schafer. Get advice on discerning qualities of fine spirits in a blind tasting from a master.

Seminars provide a unique opportunity to learn from rum industry insiders. (From MiamiRumFest.com)

* 4 p.m. – The Wonderful NEW World of Tiki Cocktails: 10 Reasons Why It’s Here to Stay, by Ian Burrell. The global rum ambassador traces the ups and downs of Tiki cocktails and details its recent steady growth in popularity around the world.
Take 5: Atomic Grog interview with Ian Burrell NEW

* 5 p.m. – Discover Agricole With Rhum St. Barth, by Paul McFadyen. The owner of the acclaimed Trailer Happiness bar in London explains his love of this unique style of rum.

I’m hoping to attend quite a few of these and report back. It’s great to see Demerara rums finally represented at the fest by the venerable El Dorado, and it will be interesting to learn more about falernum, a crucial “secret weapon” in any Tiki bar. Of course, it’s a treat to have Ambassador Burrell back with a new seminar that promises to enlighten, entertain and educate.

Rums are judged and vie for awards from a panel of experts. (From MiamiRumFest.com)

Also, be sure to check out the cool merchandise at the Island Lifestyle Showcase. There will also be live music and other entertainment during the weekend, and plenty of food is available on site and at nearby hotel restaurants. You can find a map of the exhibition space here (the escalator leads upstairs to the seminars). If you’re still looking for a hotel room, click here for more info.

A professional journalist and Florida resident for more than 30 years, Jim "Hurricane" Hayward shares his obsession with Polynesian Pop and other retro styles on his blog, The Atomic Grog. Jim's roots in mid-century and reto culture go back to his childhood in the 1960s, when he tagged along with his parents to Tiki restaurants and his father's custom car shows. His experience in journalism, mixology, and more than 20 years as an independent concert promoter make him a jack-of-all-trades in the South Florida scene. A graduate of the University of Florida's College of Journalism and Communications, Jim is a longtime web producer for The Palm Beach Post. In his spare time, he has promoted hundreds of rock, punk, and indie concerts under the Slammie Productions name since the early 1990s. In 2011, he launched The Atomic Grog to extensively cover events, music, art, cocktails, and culture with a retro slant. Jim earned his nickname by virtue of both his dangerous exotic drinks and his longtime position producing The Post's tropical weather website.
View all posts by Hurricane Hayward →
This entry was posted in Cocktails, Events, Events, Mai-Kai, Rum, Rum festivals, South Florida and tagged agricole, Bacardi, Broken Shaker, cocktails, El Dorado rum, falernum, Ian Burrell, Mai-Kai, Miami Rum Festival Cocktail Week, Miami Rum Renaissance Festival, Molokai bar, rum, South Florida. Bookmark the permalink.

This site uses Akismet to reduce spam. Learn how your comment data is processed.