In 2018, The Atomic Grog consolidated previous news and events coverage into a comprehensive 12-month calendar that offers dates, links and previews of all the major Tiki and rum events, plus a touch of modernism, surf music, Disney and other happenings of interest to the Tiki community. Below, you can still find the official artwork and links to the official sites. Following the events, the calendar was updated to include images and videos culled from social media, along with some of our own photos and relevant press coverage. We’ve archived this full year of coverage for posterity.
UPDATES: 2019 EVENTS CALENDAR
Social media: Facebook | Twitter | Instagram | Pinterest

Feb. 23 – Taste of Aloha and Art of Tiki Cocktail Showdown at the South Beach Wine & Food Festival in Miami Beach.

March 4 – Adventureland Day at Disneyland and the Magic Kingdom in Disney World.

March 31 – Bamboo on The Bayou’s Bamboo Bash in Houston.

April 7 – Magical Tiki Meet Up at the Magic Kingdom in Disney World.

How to Mix Like The Mai-Kai: Tips and techniques from Hurricane Hayward of The Atomic Grog for turning your home bar into a Tiki cocktail paradise. Check out highlights from the sold-out class at The Hukilau 2018.
Photo galleries: Facebook | Flickr

July 14 – Tiki Night 2018 – Bosko and Rolly at the Egyptian Theatre in Hollywood, Calif. 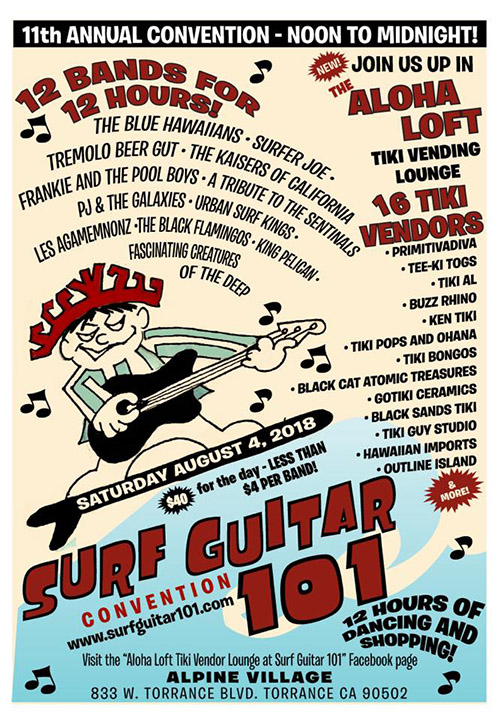 Coverage: Catching the wave – and some tasty guitar solos – at a surf music convention

Aug. 19 – The Tiki Throw Down at the New York Cocktail Expo in Queens.

Sept. 15 – Makahiki: A Night of Tiki in Indianapolis, Ind.

This site uses Akismet to reduce spam. Learn how your comment data is processed.

Check out TheAtomicGrog.com homepage for our favorite features, plus the latest news, reviews, cocktail recipes and more.

Get the new book that unveils the rich history of

An exclusive new book and mug from @sventiki and T

Mahalo to @tikitrail trail Live for the great hosp

Is it Friday yet? Join us tonight for a 151 Swizzl

There were many delicious samples to be had today

New on TheAtomicGrog.com ... Everything you need t

Check out the new 151 Swizzle tribute recipe on At

@theartistshag does it again! We love the latest D

Who’s ready for some rum? Lots of rum. Get your

Goodbye Halloween, hello @miraclepopup … They do

One more Halloween cocktail before the witching ho

Warming up for Halloween with the aptly named Fran

What are you drinking tonight?
The Grogalizer is your key to unlocking the power of the most popular tropical drink recipes.
Sign up now.

Mai-Kai: History and Mystery of the Iconic Tiki Restaurant
The definitive book on the historic Fort Lauderdale Tiki temple.
Get your copy now